Where to Find The Cheapest Bruins Vs. Canadiens Tickets for 2019-20 Season

Eastern Conference and Atlantic Division rivals the Boston Bruins and Montreal Canadiens will play four times this season – twice at Boston’s TD Garden and twice at Montreal’s Bell Centre. Below is a look at ticket prices for all four games:

For Sold Out Seats and Events, TicketIQ has Low Price Guarantees on all events at TD Garden for the Bruins, Celtics as well as Concerts. That means that if you find a secondary market ticket for less on a site like StubHub or Vivid Seats, we’ll give you 200% of the difference in ticket credit. TicketIQ customers save up to 25% compared to other secondary sites. TicketIQ also provides access to unsold face value tickets for all events at TD Garden via Ticketmaster.

Where to Find The Cheapest Bruins Vs. Maple Leafs Tickets for 2019-20 Season 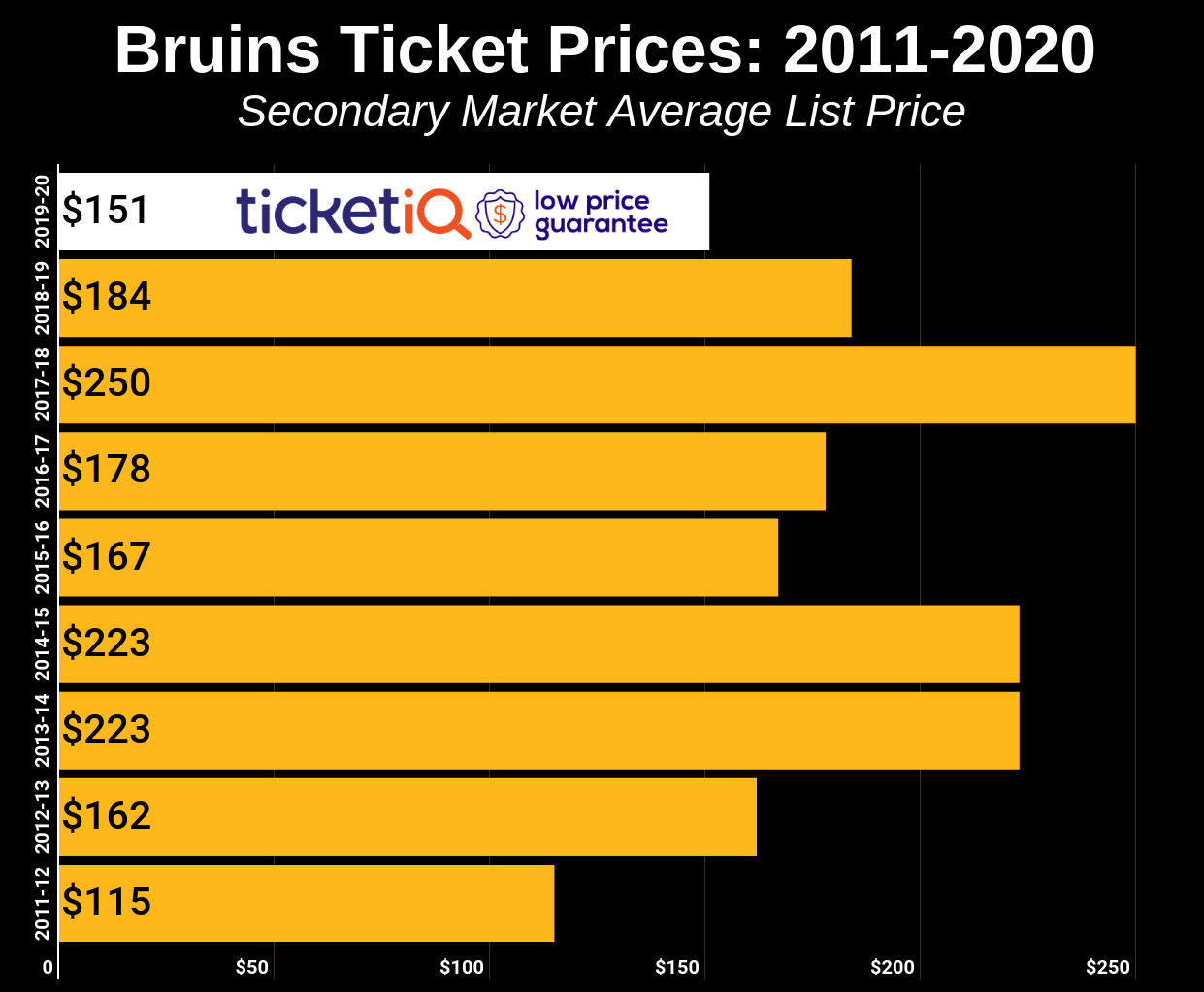 As of now, tickets are not available for Boston Bruins home games in 2021. Give us your email below for future updates on ticket availability and pricing: 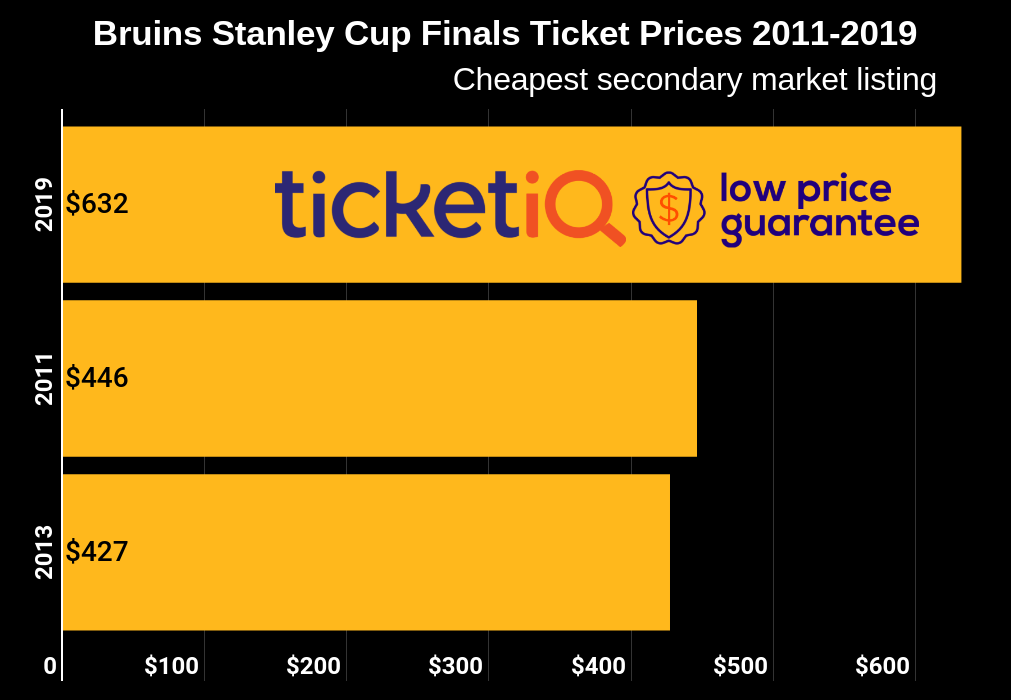 With their convincing 5-1 win in game 6 of the 2019 Stanley Cup Final in St. Louis, the Boston Bruins have forced a decisive Game 7, which will take place Wednesday night at TD Garden. If they win game 7, they'll be the 3rd team from Boston to win a m ajor league sports championship in the current calendar season. If they're able to accomplish that feat, it would be the first time since 1969-70 when New York pulled it off with the  Mets, Knicks and Jets all winning championships in their respective sports.  TicketIQ has Low Price Guarantees on all Bruins Stanley Cup Playoff tickets for games at TD Garden.

Lower Level Seats at Boston Garden for Game 7 start at $2,435 with the most expensive seats going for over $12,000 for a first row seat in section 13.
Download the TicketIQ app for $20 off your first ticket purchase 📲 🎟️

Despite the glut of championship tickets, it doesn't seem that ticket appetite has diminished for Boston sports fans.  For their third Stanley Cup Finals this decade, this is currently the most expensive we've tracked, based on the cheapest ticket available. Below are prices for the previous games over the 2019 Stanley Cup Final at Boston Garden. With Game 7 prices as high as they are, prices are approaching Super Bowl levels, with the cheap seats breaking the $2,000 mark.

For fans looking to get the best deals on 2019 Stanley Cup Finals  tickets in Boston, prices on ticket for game 5 in Boston start at $485.  While prices are as high as ever for Bruins tickets Stanley Cup Finals tickets, they're a relatively bargain compared to Patriots tickets in the Super Bowl, and almost twice as expensive as Red Sox Tickets from the World Series of years past.

🎟️🏒🐻 For the 2019 Eastern Conference Finals matchup against the Hurricanes, ticket prices are historically cheap compared to other ECF series at TD Garden. At an average price of $379, prices are just below the $384 average for the 2015 series and the $392 average for their 2011 series. For fans looking to get the best ticket prices, it's important to look at both the primary and secondary ticket market.  While TD Garden will be 100% full when the puck drops for game 2 on Sunday, currently there are many options available.  For fans looking to get the cheapest ticket, the team has around 500 tickets available for sale in the upper level behind the goal the Hurricanes shoot twice on.  📊🎟
Those tickets start at $249+fees, while the same section on TicketIQ are going for $211 after fees. Lower level seats behind the goal that the Bruins shoot twice on are starting from around $350 after fees on TicketIQ. With a sixth row tickets going for around $425. For fans looking for 'on the glass' experience, the team is also the best ticket buying options with $999 first row tickets available on Ticketmaster. While every game this series will be different, the team is likely to continue as the best option for the cheapest and the most expensive tickets, while the secondary market is the best option for most of the tickets that don't fit into one of those two categories.
While prices at the TD Garden are historically cheap when it comes to all Eastern Conference Final ticket prices, the considerably more exepsive for the Stanley Cup. Currently ticket prices for Game 1 of the Stanley Cup Finals at Boston Garden are going for over $700, which makes the prices for the Eastern Conference Finals seem like an ever better value.  TicketIQ is a ticket marketplace with a Low Price Guarantee on all NHL Tickets. With TicketIQ's Low Price Guarantee, if you find the same ticket for less (after fees) on any other major secondary site like StubHub or Seatgeek, TicketIQ will give you 200% of the difference toward the purchase.
📊🎟


This series has the NHL’s highest average asking price on the secondary market and the average for a game at Toronto is also the highest in the NHL. These teams have a rich playoff history, and you only have to look to last season to get a taste of the excitement – the Bruins eliminated the Maple Leafs in seven games in the second round. This series marks the 16th time the teams have met in the postseason. 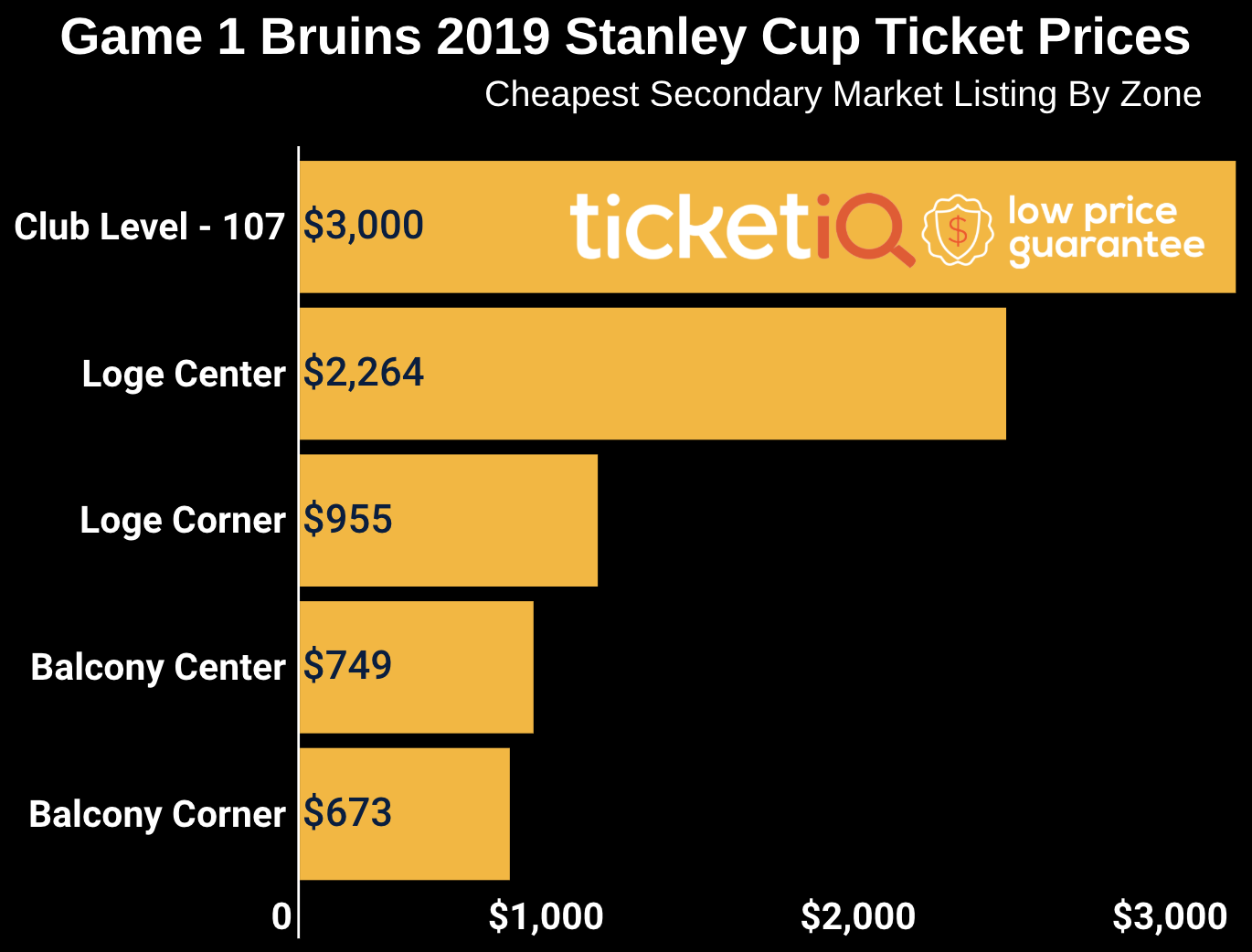 With the series tied at two games apiece the Bruins are returning home for game 5 of the Stanley Cup Finals on Thursday.  Despite the glut of Boston Championships this decade, demand for tickets from Boston fans doesn't seem to be letting up.  TicketIQ has Low Price Guarantees on all Bruins Stanley Cup Playoff tickets for games at TD Garden.  For game 5, prices start at $622 compared to $1115 for a potential game 7.  Primary market tickets are sold out for both game 5 and 7 on Ticketmaster.com, which means that the secondary market is the only options for ticket buyers looking to see the Bruins win their 7th Stanley Cup in franchise history.

Conference Finals: How To Get Best Deals on 2019 NHL Playoff Tickets 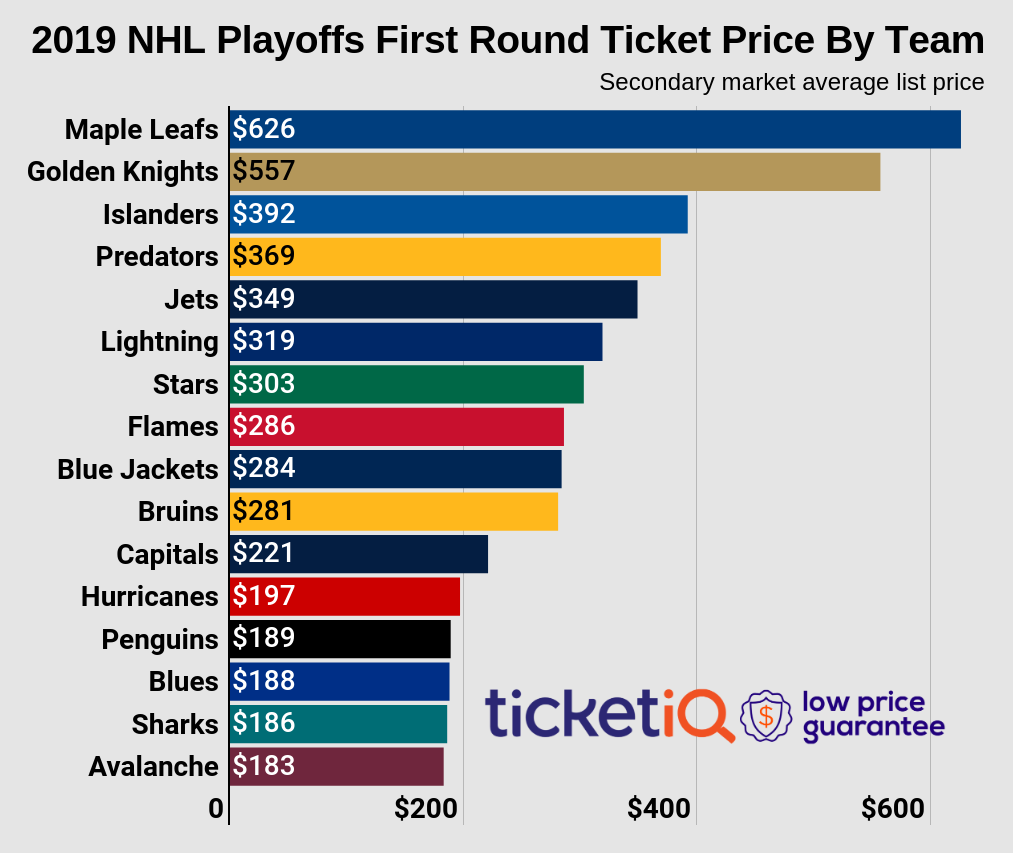 Of the four teams remaining in the NHL’s Stanley Cup Playoffs, only two were there last year, and one is making its first appearance in a decade. Demand for tickets on the secondary market is down, according to secondary ticket marketplace TicketIQ.com, making this season a great opportunity for fans to see playoff hockey.

The Boston Bruins are making their third consecutive appearance after losing in the second round last season, and will play the Carolina Hurricanes, who hadn’t made the playoffs since 2009-10 prior to this go-round. The Eastern Conference Final series starts May 9 at Boston’s TD Garden.

In the Western Conference, the San Jose Sharks are making their fourth straight playoff appearance – and that includes a trip to the Stanley Cup Final in 2015-16. This time around, the Sharks will play the St. Louis Blues, who missed the postseason last year. The Western Conference Final series starts Saturday at San Jose.

For fans looking ahead Stanley Cup tickets are available for all four teams. Right now the Hurricanes, despite being down 0-2 to the Bruins, have the most expensive 'get-in' price for a home game in the speculative Finals market.

Below is a look at both matchups.

This series has the highest average asking price for an Eastern Conference Final in four years, but it’s only the fifth priciest since 2011, when secondary ticket marketplace TicketIQ.com began tracking data. In terms of historical perspective, the $180 get-in price at Carolina isn’t only the priciest of the two conference finals, it is the 11th most expensive on the secondary market since 2011. The $145 Boston get-in price is the 16th priciest.

The Bruins advanced by beating Columbus in six games and the Hurricanes swept the Islanders. This meeting will be the fifth in the playoffs between the two franchises. The first two were when the Hurricanes were the Hartford Whalers. Since their 1997 relocation to Carolina, the teams have split their playoff meetings, with the Bruins winning in the conference quarterfinals in 1997-98, and Carolina winning in the conference semifinals in 2008-09. Carolina made the playoffs this season for the first time since 2009-10, while Boston has been to the Stanley Cup Finals twice since 2010-11, when it beat Vancouver.

This series represents a great deal for fans – it’s the second cheapest in terms of average asking price on the secondary market since 2011, when TicketIQ began tracking data. Only the 2012 series between Vancouver and San Jose, which had an average asking price of $222, was cheaper. The priciest Western Conference Final cost fans $652 in 2017, when the Nashville Predators made an unlikely run to the Finals, and beat Anaheim in the conference finals.

San Jose needed seven games to beat Colorado in the conference semifinals and advance. The Sharks are making their fourth consecutive postseason appearance, and were Stanley Cup runners-up in 2015-16 – they beat the Blues in the conference finals to advance that season. This meeting marks the sixth time the teams have played in the postseason, and San Jose holds a 3-2 postseason advantage. The Blues eliminated Dallas in seven games to advance and are making their first playoff appearance after failing to qualify last season. Prior to that, St. Louis had advanced to the postseason six straight years.

With the NHL Playoffs quarterfinals in the books, it's now onto the semifinals.  Below is the change in price for each of the advancing teams. TicketIQ offers Low Price Guarantees on all NHL Playoff tickets. With TicketIQ's Low Price Guarantee, if you find the same ticket for less (after fees) on any other major secondary site like StubHub or Seatgeek, TicketIQ will give you 200% of the difference toward the purchase.

With major first round upsets knocking out the Lightning, Flames, Maples Leafs, and Jets-- along with both Stanley Cup finalists Vegas Golden Knights and Washington Capitals--it's anyone's Cup to grab. Of the eight teams left, three have never won a championship (Sharks, Blues, Blue Jackets). For the Islanders, it's been 36 years. The Stars last hoisted the Cup in 1999 when Derian Hatcher wore the C, while the Avalanche last won in 2001 with Patrick Roy tended goal. Only the Hurricanes and Bruins have won a Stanley Cup championship in the last fifteen years, which should make an exciting May and June for all the teams left.

Below is the list of each team. ranked from most expensive to least expensive at the beginning of each series.

The long road to the Stanley Cup – the playoffs don’t end until June – is underway, and this version of the postseason will include a lot of firsts. Why? Of the eight series, five feature teams that have never met in the playoffs, including three in the Western Conference. Remarkably, only San Jose and two-year-old Vegas have played each other in the postseason before. The other three series are first-time playoff matchups.